Belgium had twenty-four members of the 1979 European parliament of which two were women. Discover their stories below. 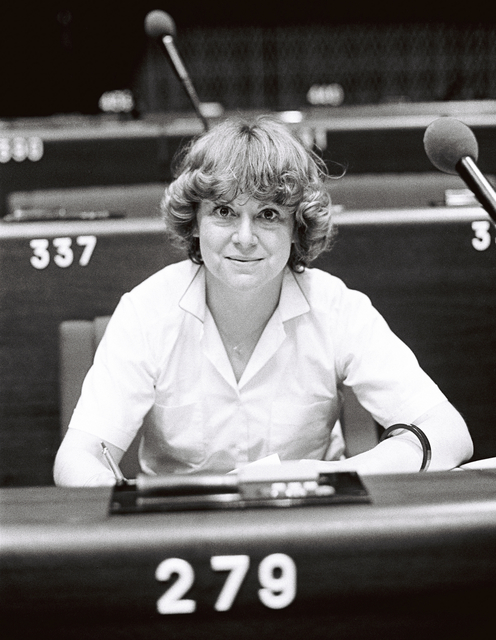 The MEP Anne-Marie A. LIZIN during a session in Strasbourg in June 1981.

Anne-Marie Lizin Vanderspeeten was born January 5, 1949 and died in October of 2015. Her career as a politician began as a member of the city council of Ben-Ahin from 1970 until 1976. Lizin was elected to be a member of the European Parliament in the year of 1979, being part of the socialist group (Socialiste Parti).

Her career in politics began as a member of the city council of Ben-Ahin from 1970–76. She served on the city council of Huy in 1977 and was an alderman for Huy from 1980–82. In 1983, she was appointed mayor of Huy, holding this position for 26 years. In March 2009 she was forced to resign because of a series of scandals. She was succeeded by Micheline Toussaint.

In 1979, Lizin was elected as a Member of the European Parliament. In her first term, she was part of the committee on energy, research, inquiry into the situation of women in Europe and the delegation for relations with Malta. In her second term from 1984,  she was also a member of the committees of delegation for relations with the countries of South America and Eastern Europe.

In 1988, she was elected on to the Belgian government, and served in office for eight years. During her first term, she was appointed as Secretary of State for European Affairs, yet she decided to leave this role in 1992 to initiate the Commission of Inquiry on human trafficking. In 2003, she became President of the Commission for External Relations and Defence of the Belgian Senate. In 2004, she was appointed President of the Senate of Belgium, before finally becoming Senator in July 2007. She was the first female President of the Belgian Senate (2004–07). On 27 January 2009 she was banned from the Socialist party after a corruption case.  Outside of her career in Belgian politics, Lizin was the United Nations Independent Expert on Human Rights and Extreme Poverty from 1998 to 2004.

Lizin was a member of the Board of Directors of the International Centre for Missing & Exploited Children (ICMEC), a global non-profit organization that combats child sexual exploitation, child pornography, and child abduction.

In 2008, she created the organisation HOCRINT, an international co-ordination network that fights against honour crimes and forced marriages. She played an active role in the End Human Trafficking Now (EHTN) organisation, sitting on the board till her death.

During her time in politics, Lizin released many publications, her most famous ones being  Women of Europe and the Third World, what solidarity? (1983), Social Democracy Tomorrow (1990) and Kosovo Independence Inevitable (1997).

Lizin was widely acclaimed for her devotion to tackling human rights issues. Of particular importance to her were the rights of women across the globe and the need to eradicate human trafficking. Lizin was appointed Commander in the Order of Leopold in 2003 and in 2007 was awarded Knight Grand cross in the Order of Leopold II.   Lizin was hospitalized in Paris on 7 October 2015.  A few days after being released from hospital in Paris, she died in Hotel Fort at Huy in Belgium on 17 October 2015 at the age of 66. 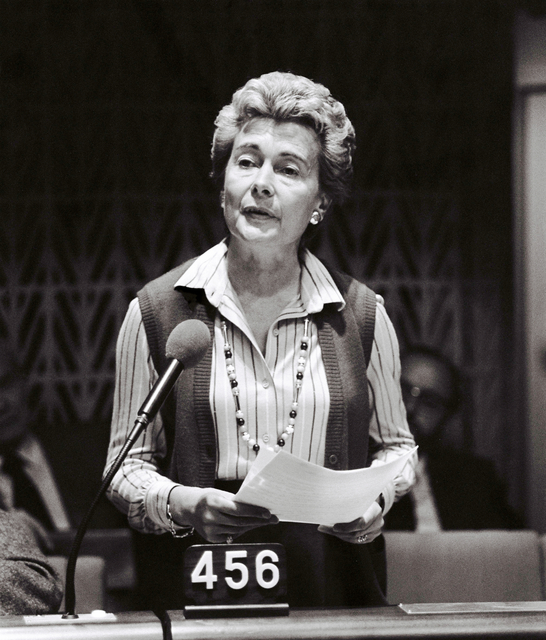 The MEP Antoinette SPAAK during a session in Strasbourg in September 1979.

Antoinette M. Spaak was born in June 1928 and is a Belgian Politician from the Democratic Front of Francophones (FDF) party. Her story in politics started with her father, the Prime Minister of Belgium Paul- Henki Spaak. Besides that, she was also the granddaughter of the first female member of the Belgian Senate Marie Janson and had other political members in her family.

Spaak entered politics after her father’s death in 1972 within the regionalist Democratic Front of Francophones (Front Démocratique des Francophones, FDF) which purported to represent the interests of French-speakers in Brussels amid the political struggles between linguistic groups. She was elected to the Chamber of Representatives in the 1974 elections and became president of the FDF in 1977, becoming the first woman in Belgian history to lead a political party.  She retained the FDF leadership until 1982 and presided over the much of the party’s greatest electoral success in the 1970s, when regionalist sentiment in Brussels was at its height. She presided over the Council of the French Community from 1988 to 1992.  An advocate of European integration, she was voted into the European Parliament in its first direct elections from 1979 to 1984 and again from 1994 to 1999. She was granted the honorary title of Minister of State in 1983.

As the FDF’s electoral fortunes declined in the 1980s, Spaak played a leading role alongside Jean Gol in arguing for conciliation between the FDF and the Liberal Reformist Party (Parti Réformateur Libéral, PRL). This led to an electoral alliance in 1995 between the FDF and the PRL, which was later joined by the Citizens’ Movement for Change (Mouvement des Citoyens pour le Changement, MCC). The FDF-PRL-MCC stood a joint list in the 1999 election, which paved the way for the formation of the Reformist Movement (Mouvement Réformateur, MR) in 2002. Spaak was a candidate for the MR in the 2007 elections at the bottom of the list and was not elected. However, she was elected to the Parliament of the Brussels-Capital Region in 2009 but resigned after less than a year. The coalition collapsed in 2011 amid a dispute on the linguistic status of the region dubbed Brussels-Halle-Vilvoorde, and the FDF seceded, rebranding as DéFI in 2016.

Spaak died at her home in Brussels, Belgium, on 28 August 2020, aged 92. Sophie Wilmès, the incumbent prime minister and MR member, described Spaak on Twitter as a “grande dame”. L’Echo said in its obituary that Spaak had “epitomised a certain idea of feminism, of francophone struggle, and European engagement” during her political career but noted that she had never held a ministerial portfolio.

Back to Gallery 2
Next: Denmark