Photo: Simone Veil, First President of the European Parliament from 1979 to 1982 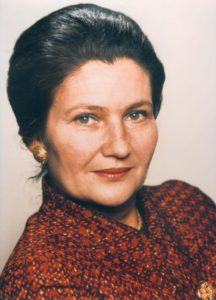 1979: A People’s Parliament is an interdisciplinary virtual art exhibition remembering and celebrating the 67 powerful women MEP’s elected to the 1979 first European parliamentary elections.

The exhibition features the biographies of all 67 powerful women MEP’s elected to the 1979 first European parliamentary elections with the women acknowledged as trail blazing role models to inspire future generations.  Alongside the stories and biographies of the 67 women, this exhibition features a range of artworks created in response to and inspired by the names and stories of those women elected. The artworks are a unique and dynamic response to themes of equality, democracy and rights created by a diverse range of artists from across European and the wider world.

This unique exhibition provides a platform enabling visitors to both learn more about and celebrate the contribution of those first women MEP’s elected in 1979. On this site, visitors will find information on the European Union and its origins in WWWII, gender representation in the EU today and information on the origins of the EU 1979 project and the organisations involved. As part of the exhibition you can listen to a series of interviews conducted in 2020 with MEP’s from Ireland, Germany, the Netherlands and France.

Our exhibition itself is divided into four galleries to allow visitors to easily access relevant information and imagery with further information on each section provided below.

This part of the exhibition provides viewers with  a detailed background  to the project and participating organisations and provides information on the European Union and its origins in WWII. Viewers have the opportunity to gain a deeper understanding of the historical background of the EU and its role in promoting democracy and equality today.

Women of the 1979 EU Parliament

This part of the exhibition provides viewers with information on the 1979 European Parliamentary election and biographies for the 67 women MEPs elected. Read about the contributions these women made to the European Parliament and to society as a whole.

In this part of the exhibition viewers can read about women’s political participation in the EU today and listen to interviews with eight MEP’s from across Europe – from Ireland, France, the Netherlands and Germany. Listen to the interviews with both male and female MEP’s as we gain a deeper insight into what it is like to be an MEP, the challenges it brings, the opportunities and hopes for the future. And take a moment to learn about what happened in 1979.

Discover wonderful artistic creations by a range of artists from across four European countries – Ireland, the Netherlands, Germany and France – and listen to our inspiring EU 1979: Panel Discussion with politicians, artists and activists.

This exhibition is a collaboration between curator Mary Moynihan, researcher and cultural anthropologist Dr Stephen Herron and artists from Ireland, the Netherlands, Germany and France. The exhibition features visual artworks, poetry, stories, images and posters, alongside information and articles exploring the founding of the EU, the 1979 first European parliamentary elections held by universal suffrage, and biographies of the 67 women MEP’s elected at that time. What all the contributors and artists share is a belief that art can serve as a catalyst for celebrating and raising awareness of human rights and for the promotion of political debate on democracy, equality and peace.