Ireland had fifteen members of the 1979 European elections of which two were women.

Labour Party
Eileen Desmond (1932-2005), politician and member of the Labour party, elected as an MEP in 1979 for the Munster constituency in Ireland.

Fianna Fáil
Sile de Valera (1954-), politician and member of Fianna Fail, elected as an MEP in 1979 for the Dublin Constituency in Ireland. 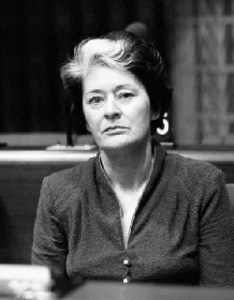 Eileen Harrington was born in Kinsale, County Cork, and educated locally at the Convent of Mercy in Kinsale, where she was one of only two girls in her class to sit the Leaving Certificate examination. Before entering politics she worked as a civil servant with the Department of Posts and Telegraphs. Desmond was first elected to Dáil Éireann in a by-election on 10 March 1965, caused by the death of her husband Dan Desmond who had been a Teachta Dála (TD) since 1948. Her victory in the Cork Mid constituency led Taoiseach Seán Lemass to dissolve the 17th Dáil and call a general election. She was elected for the second time in a year, but lost her seat at the 1969 general election. However Desmond was then elected to the 12th Seanad on the Industrial and Commercial Panel, where she served until her re-election to the 20th Dáil at the 1973 general election.

She was elected to the European Parliament at the 1979 European Parliament election for the Munster constituency. However her time in Europe was short-lived, as she returned to domestic politics when she was offered a position as Minister and the chance to impact upon national legislation. At the 1981 general election she switched her constituency to Cork South-Central. A Fine Gael–Labour Party coalition came to power and Desmond was appointed Minister for Health and Social Welfare.

Desmond’s cabinet appointment was historic, as she was only the second woman to be a member of cabinet since the foundation of the state in 1922, and the first in any Fine Gael or Labour Party cabinet. Countess Markievicz had held the cabinet post of Minister for Labour in the revolutionary First Dáil in 1919, but only one woman had held cabinet office after the foundation of the state, Máire Geoghegan-Quinn of Fianna Fáil who was appointed as Minister for the Gaeltacht in 1979.Desmond retired from full-time politics at the 1987 general election for health reasons. She died suddenly in 2005. 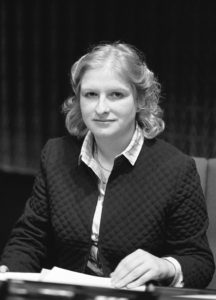 Síle de Valera  (born 17 December 1954) was an Irish politician and member of the European parliament. She was a member of the Irish political party  Fianna Fáil and  served as Minister of State for Adult Education, Youth Affairs and Educational Disadvantage and Minister for Arts, Heritage, Gaeltacht and the Islands from 1997 to 2002. She served as a Teachta Dála (TD) from 1977 to 1981, and from 1987 to 2007. She was a Member of the European Parliament (MEP) for the Dublin constituency from 1979 to 1984.

De Valera was first returned to Dáil Éireann (the Irish parliament)  in the Fianna Fáil landslide victory at the 1977 general election. She was elected for the Dublin County Mid constituency, which included the Tallaght area of County Dublin, being the youngest TD elected at that election. In June 1979, she was elected to the European Parliament for a five-year term. Later that year she was one of the Fianna Fáil TDs who criticised the policies of Taoiseach Jack Lynch in relation to Northern Ireland, and was a prominent supporter of Charles Haughey, who succeeded him as Taoiseach in December 1979. She was highly critical of Margaret Thatcher and the UK Government, and became a noted supporter of the Anti H-Block movement. She called on nationalists to vote for Bobby Sands in the 1981 by-election, which he won. She also called on Fianna Fáil voters to give preference votes for Anti H-Block candidates in the 1981 general election, a comment which caused controversy.

She held her Dáil seat until the 1981 general election, when the constituency boundaries were redrawn. She sought re-election in the new constituency of Dublin South. This caused tension within the local Fianna Fáil party, for one of the other candidates, Séamus Brennan, was a prominent opponent of Haughey. De Valera polled relatively well but narrowly failed to be elected, losing to another Fianna Fáil candidate, Niall Andrews. She contested the constituency again at the February 1982 general election, but saw her vote drop, and once again failed to be elected.

At the November 1982 general election she decided not to seek re-election in Dublin South or in any Dublin constituency, transferring instead to the Clare constituency, where one of the sitting TDs, Bill Loughnane—a fellow supporter of Haughey—had died. Clare was the in constituency that her grandfather Éamon de Valera had represented from 1917 to 1959. Again, she narrowly failed to be elected, but remained living in the constituency, and at the 1987 general election she was elected a TD for Clare. She was re-elected there at every election until her retirement in 2007.[2]

De Valera resigned briefly from Fianna Fáil in 1993, due to the removal of the ‘stopover’ at Shannon Airport which required a number of transatlantic flights from/to the US to begin or disembark at Shannon airport.  She was persuaded to rejoin the party in 1994 by its new leader, Bertie Ahern; he then appointed her to the opposition front bench. In 1997, she became Minister for Arts, Heritage, Gaeltacht and the Islands. She lost her place in the cabinet in 2002, but took office as a Minister of State. Her government office was Minister of State at the Department of Education and Science, with special responsibility for Adult Education, Youth Affairs and Educational Disadvantage. On 11 November 2005, she announced her intention to stand down from Dáil Éireann at the following election. She resigned as Minister of State on 8 December 2006, and was replaced by a member of another Irish political family, Seán Haughey.

Back to Gallery 2
Next: Italy